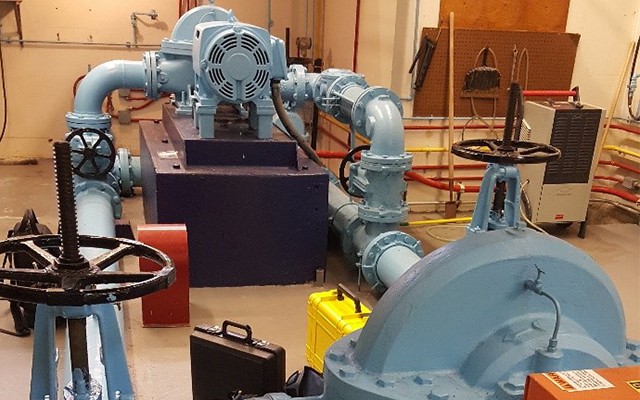 The Lynnfield Water District obtained a grant from the Massachusetts Department of Energy Resources (MA DOER). The application-based grant was obtained through MA DOER by James Finegan, the Superintendent of the Lynnfield Water District (District). The Municipal Energy Technical Assistance Grant (META) is intended to provide funding to clean energy projects for municipal entities in Massachusetts. During the application process, the District requested the assistance of JKMuir in developing a proposal for an energy efficiency evaluation of their drinking water pump station. Upon receipt of the grant, JKMuir performed a detailed analysis of the Lynnfield Pump Station. The pump station was evaluated for pump efficiency, operating costs, rate structure, incoming voltage and phase balance, and overall energy use. The intention of the evaluation was to identify energy savings alternatives for the station.

The Lynnfield Water District operates, maintains and controls the distribution system within a portion of the Town of Lynnfield. The District receives metered drinking water from the Massachusetts Water Resource Authority (MWRA).  The District then boosts the pressure of the water to maintain distribution system service and pressure. The distribution system on the MWRA side was recently modified including increasing the pipe diameter of the line feeding the District.  Following these modifications, the suction pressure at the station significantly increased.  This increase has changed the system hydraulics, which may allow smaller pumps to meet the system demands.  Reduced pressure boosting required should reduce energy usage and cost.

Typical operation is for one pump to run based on water storage tank levels, starting and stopping when the tank reaches low or high set points.  The average hours per day of operation based on pump run hours from 2015 is approximately 7 (6.8 hrs/day).  The variable frequency drives (VFDs) are currently manually adjusted to reduce the speed of the pumps, Pump 1 typically operates at 85% speed and Pump 2 typically operates at 95% speed.  When the pump kicks on it operates at the reduced speed until the shut off tank elevation is reached.  The lead pump is manually switched, by the operators typically once per month.  Two pumps have never historically been operated together, even at times of high demand.  The water storage tanks in the distribution system are the Lynnfield Standpipe 1 and the Lynnfield Standpipe 2. The two tanks are located next to each other and operate at the same hydraulic levels.

JKMuir visited the pump station and collected flow, power quality, and pressure data using portable instrumentation. After analyzing the data, JKMuir presented the Lynnfield Water District with two operational measures (OM) and one energy conservation measure (ECM) that would reduce the pump stations energy usage. A summary of the OMs and ECM and the savings associated with each are presented in the table below.

After the OMs and ECM were presented to the Lynnfield Water District, the facility staff decided to implement OM# 1 in 2016. OM #1 consisted of reducing the operating speed of pump 1 from 85% to 67% and pump 2 from 95% to 75% while increasing the annual hours of operation.

To determine actual energy savings, the energy usage, pump station flow rates, gallons pumped, and hours of operation were tracked before and after the implementation of OM# 1.

As presented above, the volume of water pumped in twelve months in 2015 as compared to a similar twelve months in 2016 and 2017 was relatively similar. There was less volume pumped during the winter months and significantly more during the summer months, as expected. However, the energy use was lower following operational changes of the pumps for most of the year on a monthly basis.

As presented above, the operating hours of the pumps increased during 2016 and 2017. However, there was less energy use at the facility.

The table below outlines the increased gallons pumped and annual hours of operation in addition to the reduced energy usage, energy demand and energy cost as a result of the implementation of OM #1.

After the OM was implemented, the average pump flow rate decreased by approximately 305 gpm and the hours of operation increased by 1,196 hours annually. The pump station pumped 18,488,900 gallons more in 2016/2017 compared to 2015. Although the volume of water pumped and hours of operation of the Lynnfield Pump Station increased, the energy usage was reduced by 14,500 kWh, and the peak demand decreased by 10 kW. Operating the pumps at a lower speed for a longer period of time reduced the energy usage while pumping a larger volume of water. Implementing OM #1 resulted in an annual energy cost savings of approximately $3,600, based on real-time operating data.  The following graph presents the operational data gathered for the pump station prior to and following the implementation of OM #1.

By operating the existing pumps at a speed where the efficiency was higher, the District demonstrated energy savings and demand charge reduction while operating for longer hours and pumping larger volumes of water.

Following the successful implementation of the “no-cost” operation of the existing pumps at the Lynnfield Pump Station the District, with assistance provided by JKMuir, applied for funding through the joint agency Gap II Funding program. The Gap II funding was a collaboration of the Massachusetts Department of Environmental Protection (MA DEP), the MA DOER and the Massachusetts Clean Energy Center (Mass CEC). The application-based Gap II Grant funding is for drinking water or wastewater projects in Massachusetts. In April of 2018, the District was awarded the funding to implement the recommended replacement of their pumps at the booster pump station.

Replacement of the existing pumps, with new pumps sized for the current hydraulics for the system, will provide additional energy and cost savings for the District.